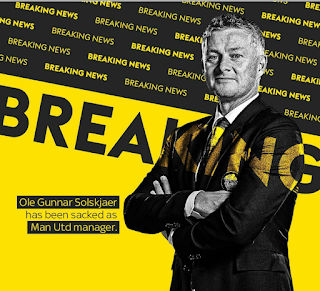 Solskjaer, who replaced Jose Mourinho as manager in December 2018 initially on an interim basis, had been in permanent charge since March 2019. While he enjoyed some success, including setting an English league record 29-match unbeaten run away from home, as well as securing successive top four finishes for the first time since Sir Alex Ferguson retired in 2013, his tenure included a mixture of devastating results and a failure to secure a first trophy since 2017.

Having soldiered on with Solskjaer through a run of three wins and seven defeats in 12 games -- a period in which they saw Antonio Conte join Tottenham despite the Italian holding an interest in any potential vacancy at United -- a 4-1 defeat to Watford on Saturday proved to be the final straw for the Norwegian.

Manchester United can confirm that Ole Gunnar Solskjaer has left his role as Manager.

Thank you for everything, Ole ❤️#MUFC

Solskjaer leaves the club seventh in the Premier League table, seven points off fourth placed Liverpool. His successor will be thrown right into the deep end with Tuesday bringing a trip to Villarreal where defeat could imperil their hopes of reaching the knockout stages of the Champions League. Following on from that the Red Devils travel to Stamford Bridge to face league leaders Chelsea.

Sources have told CBS Sports that Ten Hag is now firmly in United's sights. The former Bayern Munich B team boss has established Ajax as one of the top teams in Europe and took them to the Champions League semifinal in 2019. The Eredivisie champions play in a front-footed, modern fashion that would make him popular with supporters if replicated at Old Trafford.

However the United hierarchy would have to convince Ten Hag to depart midseason with Ajax seemingly set for another deep run in the Champions League. The 51 year old has expressed a desire to see out his project in Amsterdam though his suitors would hope that the chance to prove his mettle in the Premier League might tempt him to jump ship.

Zinedine Zidane represents a more immediately available option though he is believed to have his doubts on a potential move to Manchester. Leicester boss Brendan Rodgers would be keen to discuss the vacancy but he may find himself lower down the Old Trafford wish list.

There is also the possibility that United could attempt to see out the season with another interim appointment -- as they did when they initially turned to Solskjaer after sacking Jose Mourinho in December 2018 -- and assess the market in the summer in the hopes that they could secure Mauricio Pochettino, who is currently in charge of Paris Saint-Germain.

Solskjaer's success as a caretaker won him three years at the Old Trafford helm, a period in which United reestablished themselves in the Premier League's top four but ultimately failed to win the trophies that are a prerequisite at Old Trafford. The Norwegian leaves the club with a record of 91 wins, 37 draws and 39 defeats.