This will be the first World Cup ever to be held in the Arab world, and it will be the second World Cup held entirely in Asia after the 2002 tournament was held in South Korea and Japan.In addition, the tournament will be the last to involve 32 teams, with an increase to 48 teams scheduled for the 2026 tournament in the United States, Mexico, and Canada.

The 2022 World Cup is just over a year away, and teams are starting to earn qualification, though many spots still remain. Qualifying windows in September and October pave the way for some tense clashes in November as more teams look to book their spots in Qatar. While it will likely take quite a bit for things to be sorted out in North America's Concacaf region and elsewhere, there has been some movement in Europe, and South American clubs begin to clinch as well, with Brazil locking up a sport. The Brazilians, five-time World Cup champs, are the only team to qualify for every single World Cup.

As of mid October, three teams have officially qualified, two of which were at the 2018 World Cup.

Here are all of the teams that have officially qualified for next year's competition, which will be the last one with 32 teams before expanding to 48 for the 2026 World Cup in the United States, Canada and Mexico.

teams have qualified for the World Cup 2022?

Qatar became the first nation to qualify for the 2022 World Cup automatically as hosts when they won the bid to host the tournament. It is their first appearance in the competition, never having qualified for the finals in the history of the World Cup.

Germany were the second team to qualify for the tournament after defeating North Macedonia in October 2021 and topping Group J.

Denmark also qualified in October after their 1-0 victory over Austria, cementing their status as Group F winners.

Brazil became the first South American nation to qualify after beating Colombia 1-0, ensuring their status as the only country to reach every World Cup finals continues.

Belgium qualified as Group E winners, while France also were confirmed as Group D winners on the same day. Croatia qualified as winners of Group H, beating Russia 1-0 in a winner-takes-all clash, while Spain topped Group B. Serbia, meanwhile, qualified at the expense of Portugal in Group A after beating Cristiano Ronaldo and Co. in the final qualifier.

Netherlands booked their spot in Qatar with the final play-off slot on November 16 through a 2-0 win over Norway. Argentina qualified in the evening through a draw against Brazil and a Chile defeat to Ecuador. 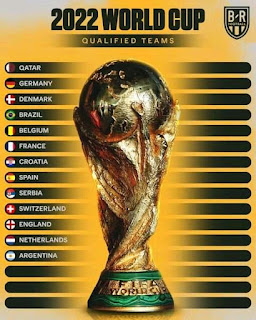 How many teams from each association can qualify for World Cup 2022?

AFC (Asia) have an allocation of four or five teams* competing in the World Cup finals.

CAF (Africa) are allocated five teams, with CONCACAF(North, Central America and Caribbean) having three or four.

UEFA (Europe) have the most teams able to qualify, with 13 spots.

OFC (Oceania) have zero or one spot.