The film The Squid Game "breaks Sales within Netflix,2021 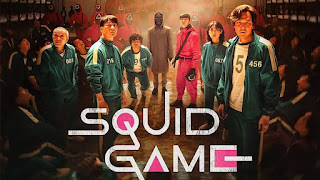 The film The Squid Game "breaks Sales within Netflix,2021

Even if you have not seen this film on television, it is very likely that you have seen its commercials online.
Thousands of people around the world are talking about this film series, which has gained a lot of popularity since it was launched two weeks ago on Netflix. In fact, this Korean film production - which focuses on the survival game - gets a lot of viewers on various platforms and even surpasses Bridgerton's romantic film audience figures. If the genre of the film’s sequel doesn’t sit as a narrative, you need to look at more action, recognizable characters and the appearance of the human environment have connected many viewers around the world. Killers in the game room In a group of 456 people, who are desperate and in debt, they are persuaded to take part in a dangerous game in which the winners are the ones who have a chance to earn $ 39 million if they manage to win over six challenges. If you fail, you die The game was simple.
Many of them were the ones who were having fun as children. And there was a mix of children's games and dangerous games that could lead to death that attracted many viewers. "People are fascinated by children's games being played by adults who are willing to risk their lives to win," Squid Game film director Hwang Dong-hyuk explained in an interview. "The games were simple, so it was up to the spectators to focus on each character rather than the conditions imposed on the competition." There is also a feature of nostalgia. For example, the Dalgona Candy Competition in the third episode is one of the games that Koreans remember most of their childhood.
In the competition, players must be careful not to cut candy using needles. And if the candy gets cracked and destroys its structure then it will have failed. A Korean Tweeter user wrote in his pages: "Squid Game makes me want to eat Dalgona sweets again. It's been over 20 years ... I don't think they exist yet? I don't think I can get them." Characters that resemble me and you Experts have pointed out that one of the characteristics of this film is its characters.
Most of them are just ordinary people in the community. Although they all have major financial challenges, they have come from various sectors in society. An example of a protagonist, for example there is a man who is unemployed and addicted to gambling and is struggling to gain respect in his family. In this story, you will meet a man who did something wrong, in the past and became an immigrant to Pakistan where he was being bullied by his employer.

Kim Pyeong-gang, a professor of cultural content at Sangmyung University, told the BBC: "Many people, especially young people of this generation, have become increasingly frustrated by the stigma attached to hate in the realities of life. As with other neighboring Asian nations, the reality of hyper-competition in South Korean society has disappointed many. Despite working hard, it is not easy for everyone to get a chance to go to college or get a good job.

The games in this novel, though on the other hand are dangerous but represent how the world can be balanced. As one community put it in the game: “All participants are equal, and we give to people who have suffered from oppression and injustice. Game of red lights and green lights The foreign media has failed to stop distinguishing between the film The Squid Game and the 2019 Oscar winners of the Parasites film, which looked at the issue of social inequality. But in East Asia, viewers appear to have seen the film more closely resembling the 2014 Japanese film "As The Gods Will."

A film that featured high school students who came from similar backgrounds, prompting some to claim that The Squid Game had been copied. For example a Japanese film had a children's play featuring "Red and Green Lights". In the game "Red Lights, Green Lights" one wants the person in the back to run while the green light is on and off, when the red light is on. In one of the episodes of The Squid Game, a robot identifies the characters who lost the game so that they could be killed.

However, Hwang has denied the allegations and said there is no connection between the films.