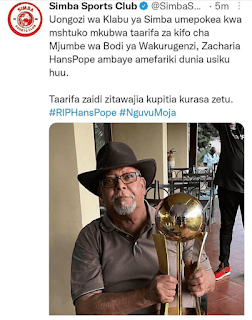 Who is Zacharia Hans Pope?
The late Zacharia Hans Pope was born in 1956 in Dar-es-salaam and grew up in Iringa.
After completing his high school education, Hans Pope joined the People's Army (TPA) where he rose to the rank of Captain, before being fired and sentenced to life in prison, on charges of treason against the first phase of the Hayati Mwl government. Julius Kambarage Nyerere in 1983.
But in 1995, the late Hans Pope was released on the pardon of the second-term President, Alhaji Ally Hassan Mwinyi, one month before the end of his term.
Zacharia Hans Pope and the Lion
The late Hans Pope began to love Simba from the heart in 1970 as a young man.
The late Hans Pope was once quoted as saying that the match that made him love Simba was against the traditional hometown, Yanga, June 23, 1973 where Simba defeated Yanga 1-0 on aggregate.
The late Hans Pope joined the Lions Friends and was later elected Chairman of the Lions Club Registration Committee, a role he played with great vigor until his death on Friday, 10/09/2021 at 4:05 p.m. at night at Agha Khan Hospital where he was being treated for his ailments.
Certainly the Lions have lost a very important pillar, surely the Nation has lost a very important person for the development of our football.
Bonyeza Hapa kusoma kwa kiswahili