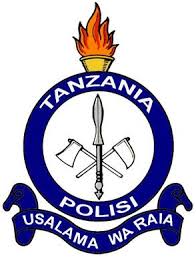 The police force in Tanzania is a national body that falls under the Ministry of Home Affairs and is lead by the Inspector General of Police. The Tanzania Police Force (TPF) is divided into five departments, which fall under the control of individual Commissioners.
Ajira za polisi 2021|Nafasi za kazi polisi 2021|Ajira jeshi la polisi 2021|Tangazo La Ajira Jeshi la Polisi

Oversight of the police is conducted both internally and externally,with internal disciplinary procedures conducted by way of tribunals and other measures by the Principal Secretary of the Ministry of Police and the Inspector-General of Police. Although private citizens are allowed to lay complaints against individual members at police stations, internal oversight mechanism are  not considered effective given the lack of transparency in proceedings and the dis-incentive to lodge complaints. 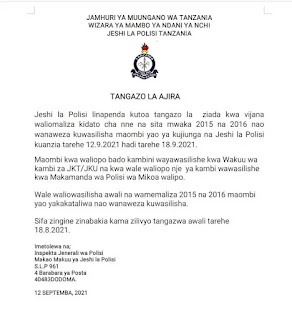 In terms of external oversight, the Office of the Ombudsman or Permanent Commission of Enquiry, which is an independent body, retains the power to investigate incidents of corruption and abuse of power by public authorities, including members of the police, and make recommendations to the President. The Constitution outlines the jurisdiction of the Ombudsman, which includes the power to investigate members of the Tanzanian and Zanzibar government, members of commissions and any other public authority, excluding the President. In addition, the Offices of the Attorney-General and Auditor-General are empowered to audit the accounts of government and examine records and accounts.

Furthermore, Tanzania’s human rights commission, which is referred to as the Commission for Human Rights and Good Governance (CHRAGG), is responsible for investigating human rights abuses, which includes allegations of police brutality, corruption, and violations of women’s rights, as well as incidents of maladministration. Although CHRAGG’s independence has been questioned, civil society organisations in Tanzania have commended CHRAGG for making valuable contributions to human rights efforts, including the training of high-level police officials. These organisations include the Legal and Human Rights Centre (LHRC), the Centre for Human Rights Promotion, and the Tanzania Women’s Lawyers’ Association, which are also actively engaged in police oversight issues.